Rolling Stone magazine hailed him as "one of the most influential singers of his generation". Thus when Thom Yorke speaks out declaring his "Tomorrow's Modern Boxes tour" will continue its run into 2020, legions of fans are all ears. Now, take notes… English musician, philanthropist, singer-songwriter and also lead vocalist-guitarist and pianist of the rock band Radiohead, and Atoms for Peace, Thom Yorke will mount the stage of the prestigious Radio City Music Hall on Monday 30th March 2020. Here's your call to action… just click the "buy tickets" link on this website if you don't want to miss out on the action. Fans are not taking this announcement sitting down, but you literally can. Book your tickets now! 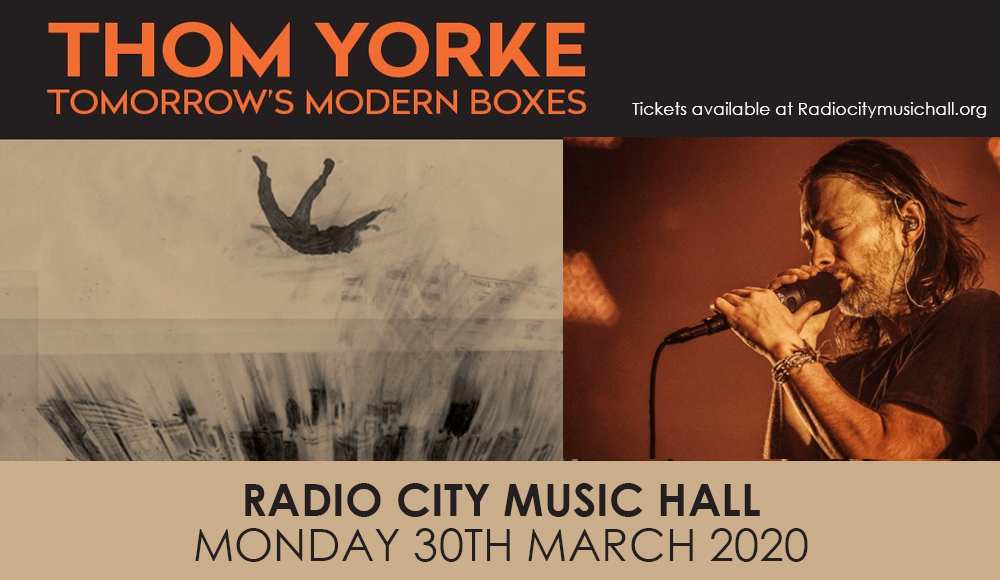 Citations and accolades from the press — Blender and MTV2 voting Yorke the 18th greatest singer of all time. Rolling Stone ranked him the 66th, writing that "by the turn of the century … Yorke's voice had made him one of the most influential singers of his generation…" All these substantiate the fact that Thom Yorke is the voice of modern rock music. He is known for his falsetto, which Paste described as "sweet", "cautious" and "haunting". Rolling Stone described his voice as a "broad, emotive sweep" with a "high, keening sound". The Guardian described it as "instrument-like" and "spectral", and wrote that it "transcends the egocentric posturing of the indie rock singer stereotype". But his voice is not just all sound. His emotive songwriting, his lyrics, his poetry are loaded statements of human rights, animal rights, environmental and anti-war causes.

Thom Yorke's career is much entwined with him being the frontman of the idiosyncratic alternative rock band Radiohead whose record sales is a whopping 30 + million albums. Along with the other members of Radiohead, he was inducted into the Rock and Roll Hall of Fame in 2019. Yorke is a formidable bastion of the alternative rock scene –cited among the most influential figures in the music industry; in 2002, and Q Magazine naming Yorke the 6th most powerful figure in music, with Radiohead ranking #73 in Rolling Stone’s “100 Greatest Artists of All Time” in 2005.

Up the ante of your concert experience. Thom Yorke should be on your must-watch list. Book your tickets now!