The universe is now smiling upon the concert trail as psychedelic funk-rock movement Khruangbin lands over the Radio City Music Hall on Wednesday 9th March 2022, which is one of their two headlining shows at the said venue. Since their debut album in 2015, "The Universe Smiles Upon You", Khruangbin has been trekking the global tour circuit and has been an in-demand act in nearly every major music festival. This tour is a much-awaited one, on the heels of their third studio album, "Mordechai", released in April 2020, followed by their new album "Mordechai Remixes". Don't leave anything to chance. Getting your tickets as early as now is your best chance to catch Khruangbin live in concert. Book your tickets now! 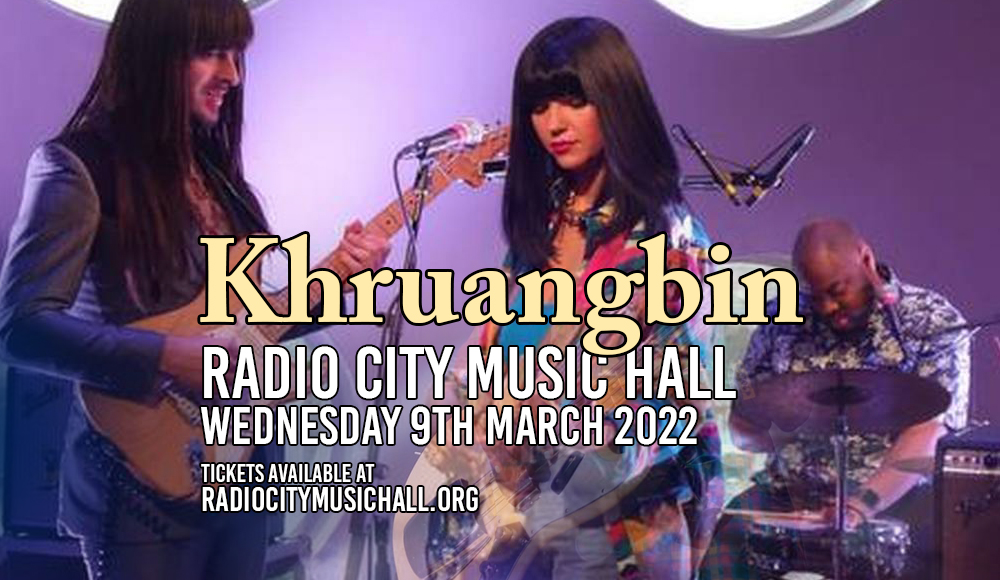 Khruangbin's debut studio album, "The Universe Smiles Upon You" released in 2015, seems to be the harbinger of the band's universal sound. Their first album is culled from 60s Thai music history, specifically from Luk thing; while their second album, "Con Todo El Mundo" (2018), was heavily influenced by Spanish and Middle Eastern sounds. Yet this musical trio is from Houston, Texas, comprised of Laura Lee on bass, Mark Speer on guitar, and Donald Ray "DJ" Johnson Jr. on drums.

Although reviews from NME have said they are so “outside the box and confounding expectations and preconceptions…", guitarist Mark Speer says otherwise. “When we first started the band, we wanted to have a formula,” he says. “It’s like, ‘This is what we do, and we’re not gonna try and go outside the box too much. We’re gonna explore the box we’re in. I’ve always been a big fan of that. I used to be in bands where was like, ‘Man, we’ve gotta think outside the box!’ And all I’m thinking is: ‘You guys don’t even know.’ Music should never be just for the sake of being experimental. Before you even start, you have to know what you’re experimenting with first.” Speer said.

The band took their name from the Thai word "khruangbin" (Thai: เครื่องบิน; RTGS: khrueang bin), which means "aeroplane", as their name. Bassist Laura Speer who was learning the Thai language at that time said the band's name symbolizes the international set of influences that shaped the band's formation.

Still true to form, Khruangbin's latest studio album released in 2020 -"Mordechai", explores on heavy influences from West African, Indian, Vietnamese, German, Czech, Mexican and many more cultures.
Laura Lee said the band wanted the album to sound like "the world, rather than any one particular part of the world”.

Don't miss this show for the world! Get a ticket to ride and fly high with Khruangbin!