11-time Grammy Award, Academy Award, Golden Globe Award, Tony Award, and Emmy Award-winning artist John Legend comes to Radio City Music Hall on Monday 24th August 2020! For the past couple of years, the performer has been busy in his role as a coach on The Voice, but now he's heading back out on the road on the Bigger Love Tour! Of course, Legend is known for his silken tones and romantic lyrics, so it's a fitting title for the stint, which sees the iconic hit-maker performing a killer set full of his enchanting tunes! For his evening's support, he'll be joined by soulful husband-and-wife duo, The War and Treaty! 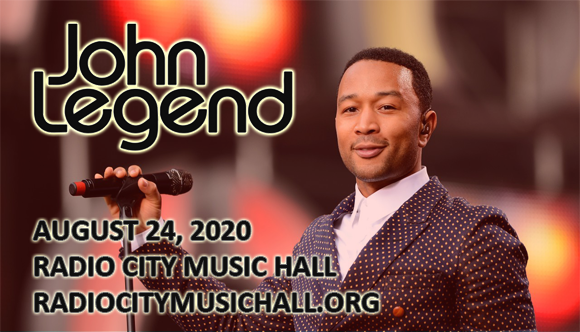 Even before he secured his record deal with Kanye West's GOOD Music, American singer, songwriter, producer, actor, and philanthropist John Legend was working with some of the best in the business – his first big introduction to the music world was as Lauryn Hill's pianist on the 1999 hit "Everything Is Everything," and he went on to work on songs for Jay-Z and Janet Jackson. Then, in 2004, Legend released his debut studio album, Get Lifted, and the world came to know him as an artist. The album was an instant success – the record debuted at number seven on the Billboard 200 and won him three Grammy Awards, including the 2006 Grammy Award for Best R&B Album, Best New Artist and Best Male R&B Vocal Performance for his single "Ordinary People". Get Lifted went on to reach number four on the Billboard chart, and was the first of four consecutive albums to reach the top five. Numerous radio hits followed over the years, and his status as an R&B icon was secured. Throughout his career, Legend has taken home 11 Grammy Awards, and has been honored with a swathe of other awards and accolades, including the Hal David Starlight Award from the Songwriters Hall of Fame, the Academy Award for Best Original Song and Golden Globe Award in 2015 for co-writing the song "Glory" from the film Selma, and a Tony Award for co-producing Jitney for the Broadway stage. He one of 15 people, and the first black man, to have won an Emmy, Grammy, Oscar, and Tony (EGOT), having received a Primetime Emmy Award nomination for his acting role in Jesus Christ Superstar, and won for his role as a producer of the show.