They were once touted as exemplary teen tenor heartthrobs. Now they're grown men…and hotter than ever! Indeed, Il Volo's brand of "popera" has gotten so much better in time. They have forged on to carve their names on the world stage with their astounding blend of opera, pop and classical symphonic music laced with sexy Latin beats. Il Volo is once again cruising stages across continents but nothing beats the pleasure of having them over at the famous Radio City Music Hall on Thursday 6th February 2020. A world-renowned venue with a world-class talent is one of the most memorable concerts one can ever experience in this lifetime. Don't miss the magic, the spectacle, and the memories this event has to offer. Tickets are on sale right here, so book them right now! 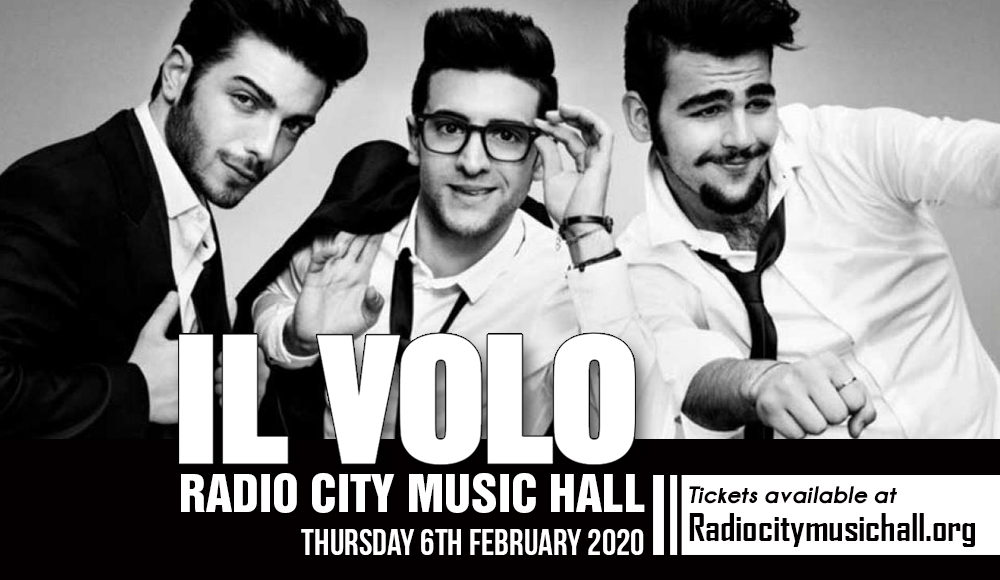 In 2009, Piero Barone, Ignazio Boschetto and Gianluca Ginoble were just some of the teen contestants of Italian talent show "Ti lascio una canzone". The boys shone like seasoned stars in their own ways, up until the creator of the show decided to group them together, similar to The Three Tenors, for a performance of "O Sole Mio"; the result was magical and stellar. The road to worldwide stardom has been paved for the boys collectively christened Il Volo.

“Il Volo,” means “flight,” a fitting name for these three young tenors poised to spread their wings and fly. First stop was their participation in the 2010 charity single “We Are the World 25 for Haiti”, a rendition of the 1985 hit “We Are the World”. Soon afterward they released their self-titled first album which featured “Il mondo”, “Un amore cosí grande”, and Charlie Chaplin’s “Smile”, peaking at No. 6 on the Italian Albums Chart, representing their mainstream breakthrough. As they toured for the US release of their album, they graced top rating shows like “Good Morning America”, “The Ellen DeGeneres Show”, and “The Tonight Show”; which gave them due exposure that propelled chart action and hit the No. 10 spot on Billboard 200.

Il Volo graced high profile appearanced and performances at the 80th annual tree lighting at the Rocketfeller Center in New York, the Nobel Peace Prize Concert in Oslo, Norway, performing the tracks “Il Monde” and “We Are Love”.

A throwback to the young IL VOLO — they were quoted saying: “We want to share our love for this music with people all over the world, including kids our own age.” That they say “would be our dream come true.”

Il Volo is still living that dream. Their music has inspired generations and has kept the fire burning for the love of opera and classical music.

There's no way you will miss this for the word. Word travels fast, and so does demand for tickets to this show. Hurry, book your tickets now!