The undisputed Queen of Neo-Soul, Erykah Badu, comes to Radio City Music Hall on Thursday 30th September 2021 as part of her very limited fall tour! Badu (aka Sarah Bellum, aka DJ Lo Down Loretta Brown, aka Miss Badoula Oblongata) is a commanding, enthralling, and altogether fun presence on stage with an insane wealth of multi-platinum-selling back-catalog to draw from… With her uncanny ability to morph and shift her music into something almost transcendental, know this is going to be a once-in-a-lifetime show! 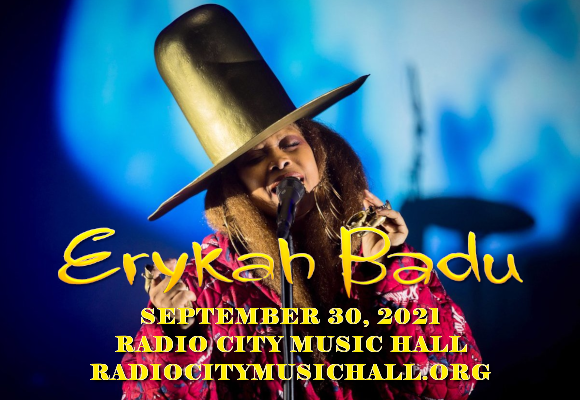 American neo-soul singer, songwriter, producer and actress Erykah Badu made her debut in 1997 with the album Baduizm, which launched the singles "On & On", "Appletree", "Next Lifetime" and "Otherside of the Game", and has been certified triple-platinum by the RIAA. She followed later that year with a double-platinum live album, but it was 2000’s Mama’s Gun that brought her her first top-10 single on the Billboard Hot 100 with "Bag Lady". Platinum certified by the RIAA, it also spawned the singles "Didn't Cha Know?" and "Cleva". Three years later, Worldwide Underground followed, bringing her more hits with "Danger", "Back in the Day (Puff)", and "Love of My Life (An Ode to Hip-Hop)", which also hit the Top-10 on the Hot 100 chart. Next, Badu released two concept albums: New Amerykah Part One (4th World War) (2008) and New Amerykah Part Two (Return of the Ankh) (2010). Both were successful critically and commercially, hitting the top-five of the Billboard 200, and produced several successful singles. Her most recent release is the 2015 mixtape But You Caint Use My Phone. Over the years, Badu has been the recipient of many awards and accolades, including four Grammy Awards from 19 nominations.