Bona fide rock god Lenny Kravitz comes to Radio City Music Hall on Tuesday 27th August 2019 on his extended Raise Vibration Tour! The tour supports the release of last year's album of the same name, Kravitz's eleventh studio album to date! Expect the full rock 'n' roll Kravitz treatment as the multi-instrumentalist showman delights fans with material from the album, as well as several of his classic, chart-topping hits! It's gonna be one wild night! 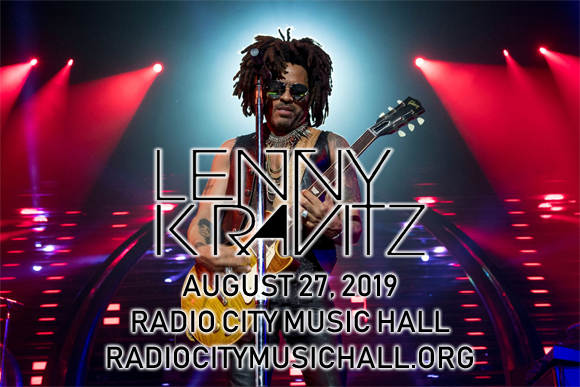 Finding worldwide success with his 1991 breakthrough hit "It Ain't Over 'til It's Over", from his second studio album, Mama Said (1991), American singer, songwriter, actor and record producer Lenny Kravitz began his career in 1989 when he signed to Virgin Records. After the success of "It Ain't Over 'til It's Over", his popularity continued with his third studio album, Are You Gonna Go My Way (1993), which reached number-one both in the UK and Australia, as well as the Top 20 in the US, and launched the global hit single of the same name. For four years in a row, between 1999 and 2002, Kravitz won the Grammy Award for Best Male Rock Vocal Performance, breaking the record for most wins in that category and setting a record for most consecutive wins in one category by a male. Raise Vibration, his eleventh and most recent album, was released in 2018.